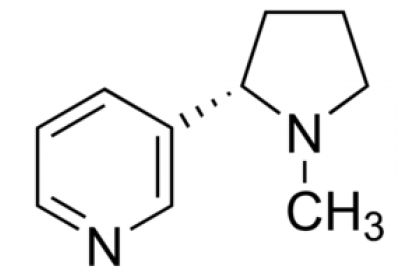 Nicotine is the most abundant alkaloid found in the leaves of Nicotiana species. It is a major toxic agent.

(-)-Nicotine has been used:
• to stimulate neutrophils in extracellular DNA fluorescence assay and in immunostaining of neutrophils
• to study the effects of chronic neonatal nicotine exposure on nicotinic acetylcholine receptor (nAChR) binding, cell death and morphology in hippocampus and cerebellum
• in an in vitro study to evaluate the effect of root exposure to nicotine or cotinine on the morphology and density of fibroblasts

Nicotine binds to nicotinic acetylcholine receptors and exhibit both neuroprotective and neurotoxic effects on the developing brain. It is associated with lung cancer development and reduces the efficiency of chemotherapeutic agents.In addition, nicotine has an ability to impair phagocytic host defense and also increase reactive oxygen species (ROS) associated injury. It also stops Akt/ protein kinase B (PKB) deactivation and decreases spontaneous death of neutrophils. Nicotine is used to treat Alzheimer′s and Parkinson′s disease.